From the metaphorical war of Twitter and Facebook, a victorious blue bird has certainly flown to the top. Twitter is tipped to be the pinnacle of social media platforms this year, and as such, businesses will turn to those 140 characters more than ever. From retail to B2B financial services, all businesses can benefit from the social network. But what’s new this year and how can you get the most out of it for your company?

According to Seth Fiegerman, Twitter will have “more prominence for pictures, articles, TV clips… you name it”.

Video marketing was an astounding online element last year, and this can and will integrate further into Twitter in 2014. According to Twitter’s own reports, “42% are likely to retweet, reply, or mention brand Tweets that contain a fun or interesting video”. 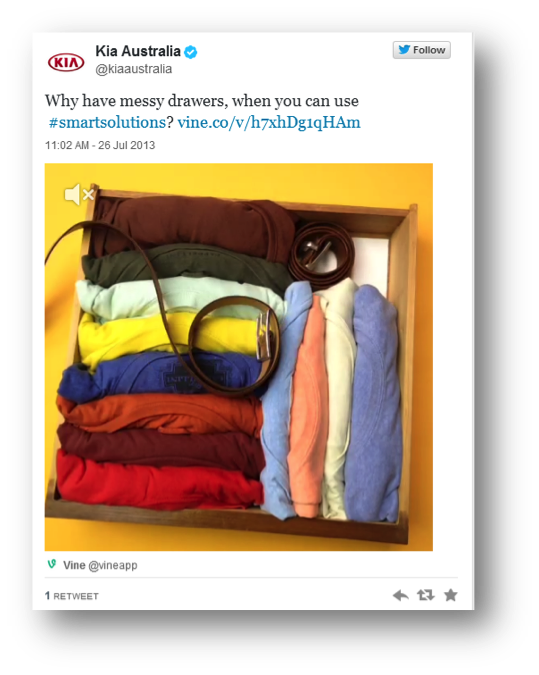 Thinking of visual communication is particularly welcomed in the fast-paced news feed of Twitter. With only a short window to be noticed in, it’s especially important on Twitter to catch the user’s attention. Plenty of research has looked in to this further – and the evidence shows that imagery does better.

The introduction of Vine was a notable one, bringing about a few short seconds of footage. 2013 saw some attempts at branded Vines across a number of industries, but arguably Vine is in a primitive stage and has endless potential.

Experts predict a tighter and more efficient access to Vine production and sharing on Twitter this year. Being owned by Twitter, Vine is an app that will see regular updates and improvements. Predictions include;

Watch this space for interactive video too, as Mark Schaefer describes: “I think this is the year we’ll see a real breakthrough in interactive video. When you think about it, our relationship with video has not changed significantly since 1950. Basically, we ‘observe.’”

Twitter is not another billboard or flyer for you to sell, sell, sell. Twitter is a platform allowing you to be on a level with your customers and to become personal, which any marketing expert will argue is even better.

Engage and familiarise with your users. If there is an opportunity to converse with a customer or if your brand ties in to a popular tweet – let them know.

Just as you would in any other conversation, be interested in your followers, ask questions, talk back, have your own opinion. Boohoo Australia is a good example of personalisation. The brand keeps a friendly conversation going with its readers on a daily basis by asking general questions and encouraging natural conversation.

Evermore popular in the coming year will be the use of promoted tweets. The option to promote Tweets, hashtags and your account will make it much easier to reach your brand’s intended audience. This will help you to kick-start an interaction with the right users. This method is costly so, if it is something you would like to adopt, spend time really looking into which promotions have worked well and which have not performed so well for other businesses.

Twitter battles, comedians and models aren’t followed without reason. They entertain and keep the follower interested. A user will not use Twitter to find out about latest sales as they want news, views and humour. Tweets are therefore the voice of your brand, not an advertorial.

Assessing the last year’s most popular trends on Twitter, ‘#YouKnowYoureAustralianWhen’, ‘#AusPol’ and ‘#royalbaby’ gives an idea of the topics people want to discuss and read about. By staying involved in news and trending topics, you will give your account an instant platform. Thinking creatively about how you can comment on these topics will also give your voice a memorable asset. 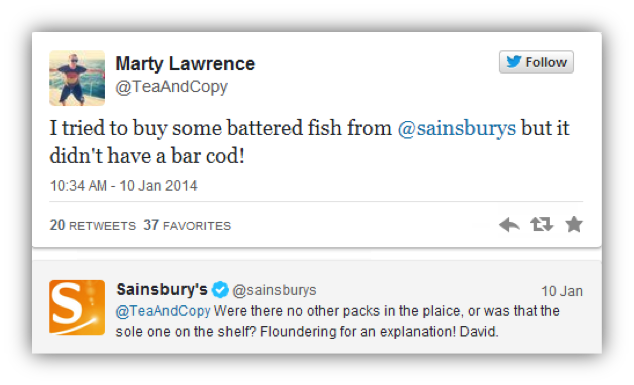 News is just one angle, for many brands, you can make a memorable impact by engaging with other users. In the UK, Sainsbury’s engaged in a game of puns with a customer who had initially been disappointed about their supermarket’s stock. By the end, Sainsbury’s came out more popular than ever, turning a complaint into a positive PR stunt.

Industry updates are constantly on the go, so your best bet is to keep reading and evaluating what’s possible for your Twitter. Some predictions of what will be popular in the coming year include:

Tess is an Online Marketing Executive who has written this article on behalf of Boohoo.com.