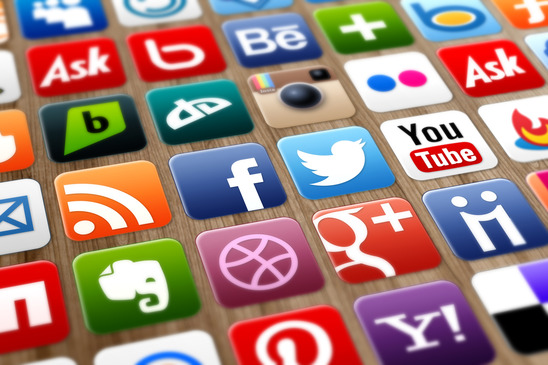 Almost everyone has caught on to the idea that you need to have an online presence if you’re going to have any presence at all. It’s easy enough to put together a basic website, but to ensure that your website pops up on the first page of a Google search, things gets a little more complicated. You really have to figure out how to make yourself seen and heard in the jungle that is the online sphere. One way to get noticed: social media.

Everyone is using social media now; it’s no longer the domain of teenagers and inner city hipsters with a political agenda. Everyone, from 12 year old tweens to 80 year old retirees, is not only logging onto some form of social media, they’re spending a considerable amount of time on it. As such, using social media effectively is akin to having a billboard or an advertisement following your potential customer around all day.

The benefits and possibilities extend far beyond simple advertising opportunities. Social media also gives you unparalleled access to your customers. You can interact with them, and vice-versa, in ways that aren’t possible outside of the social media context. You can constantly update them on new products and answer any queries they may have straight away. You can float ideas for products on social media and gauge customer response. And you can even provide a forum for feedback that feels far more personal than sending out customer satisfaction surveys.

To help you work out where your target market is spending it’s social media time, we thought we’d take a look at the statistics for social media usage that have appeared over the past year.

Despite an influx of competition, Facebook continues to grow steadily each year. It now has 14,000,000 (yep, that is 14 million) Australian users, a figure which has jumped up from 13,200,000 at the same time last year. Despite this continuous growth, some experts contend that Facebook has started to lose its sex appeal, particularly in the younger demographics. With parents and grandparents now picking up on the Facebook trend, their children (the current tween and teenage market) are less likely to jump onboard. Who wants to ‘friend’ their father after all?

Despite this, there are still a number of advantages when it comes to Facebook. It is fully integrated with Instagram, so you can still target a younger, hipper audience and keep the majority happy. And, with 14 million users, it is almost a necessity to have Facebook as part of your social media marketing armoury (depending on your demographic of course). It’s also worth remembering though that the size of Facebook also presents difficult marketing problems. You really have to work to stand out in a crowd of 14,000,000.

So, if Facebook’s not cool, what is?

Instagram is definitely the next big thing— the numbers prove it. Instagram has gone from having 1,600,000 active users in May 2014 to 5,000,000 at the same time this year. Far and away, it experienced more growth than any other social media platform. This says a lot about the type of social media content that people prefer to consume—images are more important than ever. And, Instagram is the best platform for sharing images, particularly given its mobile friendly nature.

Snapchat is the next closest rival when it comes to image-based social media. It’s numbers remained steady at 1,070,000 active users per month, but if you are targeting a young audience that platform is still well worth considering, given the demographic of its users. Other image sharing networks, such as Flickr (which has 660,000 average monthly users in Australia) and Pinterest (with just 330,000 average monthly users in Australia), only command a tiny share of the social media audience in comparison.

Video based social media marketing carries almost as many opportunities as imaged based platforms. YouTube’s active user numbers jumped up another million in the past year to reach 13.7 million active users per month, making it the second most popular social media platform by a long way—the next closest is WordPress with 5.8 million users, which is a drop on 2014 when WordPress enjoyed 6.2 million users.

And Let’s Not Forget About LinkedIn and Google+

LinkedIn is still the winner for the more corporate, business orientated audience. It’s numbers remained steady over the last 12 months, at 3.5 million active users per month. You still can’t beat it’s ability to build networks and reputation, across  a large international reach. Google+ seems to be going backwards these days, having lost 5,000 active users in the past year, so that just 60,000 per month remain.

So what does all this mean?

Facebook is still the king, but there are some challengers. The numbers prove that any social media marketing campaign (particularly those aimed a younger audience) should make images and Instagram a priority. Instagram user numbers are likely to continue to rise, and you don’t want to miss out on that share of the market. Video based marketing also presents exciting opportunities for more dynamic and interactive marketing campaigns and Snapchat is a particularly interesting example of ways you can reach out to a younger audience. It’s all about knowing your audience and finding out where to reach them through social media.

If you’re looking for some more light reading on social media statistics in Australia, take a gander at last year’s review: Australian Social Media Statistics 2013 vs 2014.

Editor at Marketing.com.au
Sally has worked in marketing, communications, and PR for over 15 years. She is the Chief Wordsmith at Wordly: a copywriting and content marketing agency that works predominantly with WordPress powered websites.